Electric vehicles are the future. That is the consensus, at least, and while many countries around the globe have started to fully embrace EVs, India is still playing catch-up. But, India’s EV movement is slowly but steadily gathering pace and at the forefront as one of the flag bearers is Tata Motors.

The Tata Nexon EV has been on sale for over a year. It has been the most affordable EV out there and consequently the best-selling as well. That, however, changes with the arrival of the Tata Tigor EV as it lowers the entry price into the realm of electric cars making them relatively more accessible for the masses. The headline here is that this is the most affordable EV on sale in India with a very practical range of 306km as per Tata’s claims. 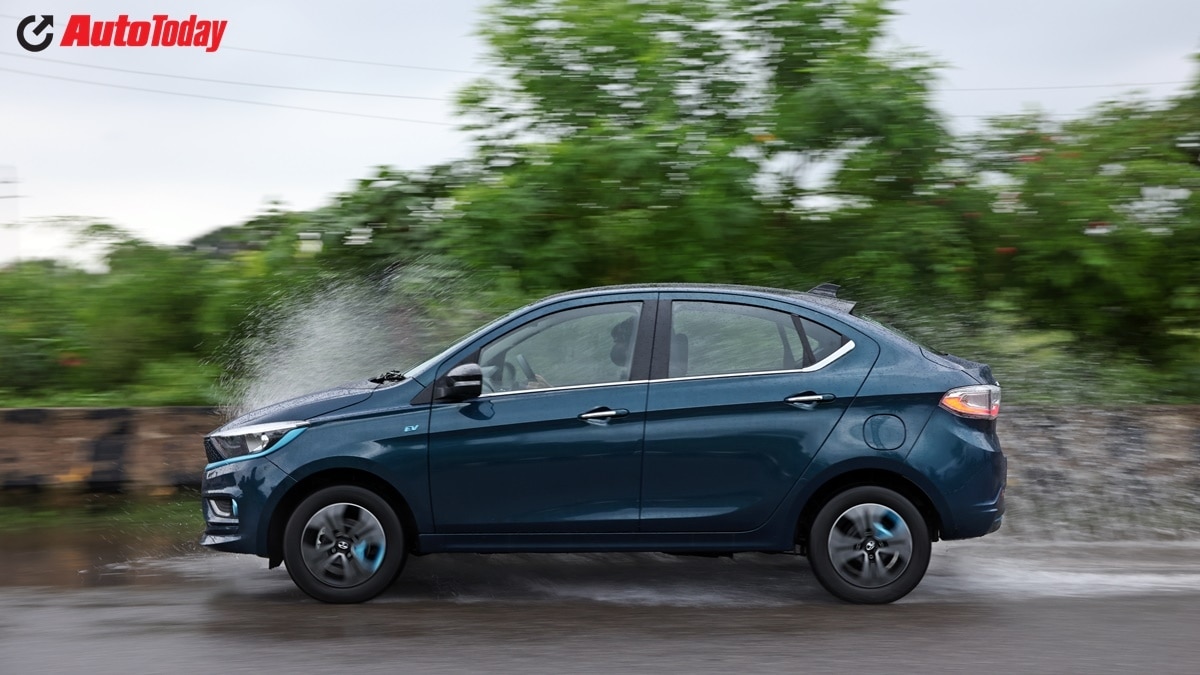 To set the Tigor EV apart from its fossil fuel-sipping sibling, Tata has made a handful of changes including this new Teal Blue paint scheme exclusive to the all-electric variant of the compact sedan. In place of the grille sits a body-coloured panel with the signature tri-arrow motif and there are blue highlights around the front grille and bumpers along with a smattering of EV badges all around. These blue highlights will stand out more if you opt for the Daytona Grey paint, which is the only other colour option available. Customers can also opt for a dual-tone treatment that brings with it a blacked-out roof and ORVMs for Rs 15,000 over the top-end XZ+ grade. Those wheels might look like alloys from afar but closer inspection reveals them to be plastic wheel covers stuck on to a similarly shaped steel rim. Like the ICE Tigor, the EV gets projector headlamps, LED DRLs and LED tail lamp inserts.Dashboard layout, space, and features nearly identical to the Tigor petrol. Seat upholstery has been changed to reflect this variant’s EV credentials. (Image – Harvinder Singh)

The aforementioned blue highlights have made their way into the cabin as well around the aircon vents and instrument console. The seat upholstery also sports similarly coloured highlights along with a tri-arrow motif pattern to differentiate it from the petrol variant. Notable changes include a digital instrument panel with EV specific displays for range, power consumption, battery level and gauges to relay the degree of throttle input and regenerative braking.Instrument panel displays EV specific data like battery status and relative range and power consumption. (Image – Harvinder Singh)

Replacing the petrol Tigor’s gear lever is a rotary dial for selecting reverse, neutral, drive and sport modes. While it is fairly straightforward to use, it does need brighter backlighting for the selected mode to be clearly visible during the daytime. Despite the battery pack being spread along the floor, space within the cabin remains unchanged with the same amount of legroom, knee room and headroom as the ICE Tigor. However, the battery pack has forced Tata to move the spare wheel into the boot, although it has been tucked away fairly neatly to one side.

Rotary dial to switch between reverse, neutral, drive and sports modes. When parked the car has to be left in N with the handbrake engaged as there is no P mode. (Image – Harvinder Singh)

Tata Tigor EV gets a permanent magnet synchronous motor occupying space under the hood powering the front wheels. It pairs with a 26kWh battery pack and boasts a peak power output of 75bhp and 170Nm of peak torque. Sport mode or S on the rotary gear selector gives you access to the full quota of power and help the Tigor EV post impressive acceleration figures. While exact figures we’ll be able to share once we do a proper instrumented test, Tata claims that the Tigor EV can do the 0-60kmph run in 5.7 seconds. No word on the 0-100kmph figure.Permanent magnet synchronous motor powers the front wheels and pairs with a 26kWh batter pack. Tata Tigor EV has a max power output of 75bhp and a peak torque of 170Nm. (Image – Harvinder Singh)

Numbers aside, the Tata Tigor EV can still easily out-accelerate most similarly sized and priced ICE alternatives but aggression with the throttle is best avoided since it has a negative impact on range. Driving excitement is further accentuated by a nicely balanced ride and handling setup. With the heaviest component, which is the battery pack, spread along the floor, centre of gravity stays low making the Tata Tigor EV more dynamically accomplished than the petrol variant. It still isn’t outright sporty as taking corners at speed bring you close to the threshold of understeer rather quickly, but it still is a tad more exciting than most regular petrol or diesel alternatives. There is that inherent firmness in the Tigor EV’s suspension setup, but based on our time behind the wheel, it performed quite well over bad patches and remained very stable at triple-digit speeds as well so, we’ve got no complaints there. Not much in terms of feedback from the steering wheel, but it is very well-weighted.Portable charger plugs into a regular 15A socket enabling a 0 to 80 per cent charge in 8hr 45min. (Image – Harvinder Singh)

306km that’s the claimed range as per ARAI testing standards. That’s a figure you are unlikely to match and that’s hardly surprising considering even when it comes to petrol or diesel vehicles it is next to impossible to match claimed fuel efficiency figures. Maybe it’s time to revise ARAI’s test cycle. Anyway, realistically, based on our experience with the Tata Tigor EV driving around the city within speed limits users can expect around 180km to 200km on a full charge. This figure can be higher, but that depends on an individual’s driving style. Theoretically then, if you’re averaging 30 to 40km daily mostly within city limits, a full charge should be enough for five days or a week’s worth of running. With the regular charger that comes bundled with the car and one that plugs into a 15A socket – you’ll need one in your parking space Tata claims a 0 to 80 per cent charging time of 8hr 45min. Most users will be plugging their vehicle in at around 15 to 20 per cent SOC so in 9 to 10 hours or basically overnight, they’d have enough juice for a week’s worth of home to office roundtrips easily. There’s always the option of a 25kW fast charger that can be located via Tata’s ZConnect app that will recharge the batteries from 0 to 80 per cent in 65min.With the traditional space for the spare wheel being taken up by the battery pack, it has been moved to the boot. (Image – Harvinder Singh)

Charging infrastructure especially along highways is still lacking in most parts of the country relegating EVs strictly to the confines of the city in most cases. An EV still cannot be the only vehicle unless for most buyers keeping the challenges of outstation driving in mind. As a second car, one that is going to be used in urban conditions for regular office commutes, etc. the Tata Tigor EV does make a strong enough case for itself. Yes, the additional cost up front is still quite high and for similar money, one can always get a bigger, more feature-rich and more spacious ICE alternative, but the Tigor EV is still significantly cheaper to run, around five to seven times lower running costs, and in the long run, you will recover the cost. Also, you will be doing the environment a favour by cutting out tailpipe emissions. Long story short, the Tata Tigor EV makes a strong case for itself as a city runabout with ample space for four, a decent enough list of features and likeable performance.

As per ARAI’s test cycle, the Tata Tigor EV has a range of 306km. Real-world figures will be lower than that, closer to 200km approximately. (Image – Harvinder Singh)