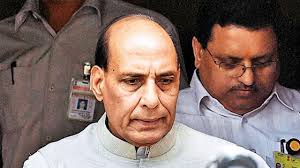 Union Home Minister Rajnath Singh on Sunday said he does not look terror outfit at terror outfit ISIS as a challenge, as he believes that Muslims in India love their country.

“I’m sure the threat of radicalisation by ISIS won’t be an issue in our nation because people who follow Islam in India, love the country,” the HM said, as per ANI.

“I have stated clearly that no innocent should be troubled and none of the offenders should be spared,” he added.

Singh was in the city to attend three-day annual DGP conference. He had inaugurated the conference on November 25.

Singh said they discussed the emerging security scenario, challenges faced by state police and also brainstormed on issues like challenges of terrorism, radicalisation, cyber-crime, road safety and how to improve airport security.