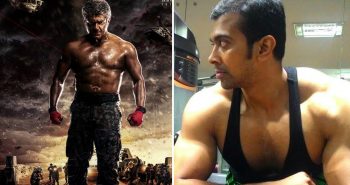 Over waiting hard the title of ajith film have been released through the first look today morning 12.01 and as everyone knows ajith had a long break after the vedhalam movie because he have to go through some surgeries and he taken a rest of 6 months. In that period only he had put up weight.

In this movie vivegam ajith has to act as a international cop so have to build the body, and he appointed a personal fitness trainer named “YOUSUF” by his hard work thala ajith had a tremendous level of transformation with in short time period. After the release of first look today morning yousuf had updated a status in his facebook page as follows.

“Had the privilege of working with #Ajith sir in his #Transformation_Journey. It’s an honour to see my name in the 1st look poster of Ajith Sir’s movie! Thank you so much Ajith sir, Director Siva sir & the entire Vivegam Team!! All Praises to the Almighty!!! “