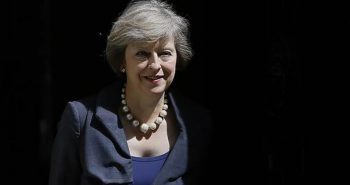 UK Prime Minister Theresa May on Wednesday signed the letter that will trigger Britain’s exit from the European Union.

The letter, giving official notification to other 27 European Union (EU) members that Britain has invoked Article 50 of the Lisbon Treaty, will be delivered to European Council President Donald Tusk by British ambassador to the EU Sir Tim Barrow today.

It sets the clock for a two-year negotiation process for Britain’s relationship with the EU as a non-member. Unless that time-frame is extended, Britain will have left the economic bloc by March 29, 2019.

May is scheduled to chair a cabinet meeting today before making a statement in the House of Commons confirming the countdown to the UK’s departure from the EU has begun.

She will promise to “represent every person in the whole United Kingdom” during the negotiations, including EU nationals, who are worried about their future following Brexit.

The UK has said it wants an “early agreement” to guarantee the rights of EU citizens living in the country and those of British nationals living abroad. It follows a referendum in June 2016 in favour of Brexit.