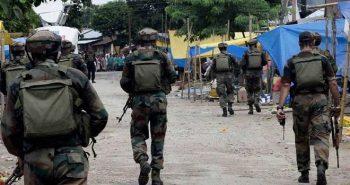 A joint team of Indian army and Assam Police launched an operation in Pengeri reserve forest.

Assam Chief Minister Sarbananad Sonowal condemned the attack and said that the perpetrators will be punished. Also, Home Minister Rajnath Singh spoke with Sonowal on the phone and said that the MHA is closely monitoring the situation.

“Deeply anguished to learn of the death of Army soldiers in a blast in Tinsukia. I pray for the speedy recovery of our injured soldiers,” said Rajnath Singh.

Reports state that all the injured soldiers were airlifted by a helicopter to Digboi hospital where they will be undergo treatment.

More details of the encounter are awaited.