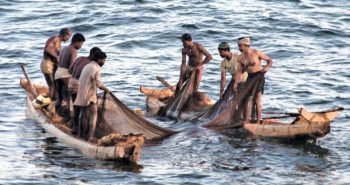 Four Tamil Nadu fishermen suffered serious injuries after they were attacked, allegedly by Sri Lankan fishermen, near Kodiyakarai off the island nation.

“Their fishing nets and equipment, cell phones and walkie talkies were also taken away,” he said.

The fishermen were part of a group of seven who had put out to sea early this morning from Pamban, Arul said, adding the others managed to return to shore.

The four fishermen have been hospitalised.