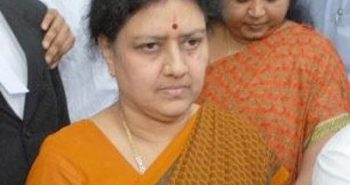 Tamil Nadu Governor Ch. Vidyasagar Rao is not likely to administer oath to AIADMK’s legislative party leader Sasikala as the state’s chief minister on Tuesday, said sources. The Governor is said to be examining the legal implications as Sasikala’s name features in the disproportionate assets case.

Earlier, a plea was filed in the Supreme Court to put on hold the swearing in ceremony of Sasikala until the verdict in the Disproportionate Assets case is decided. The plea states that Sasikala should not take over as chief minister of Tamil Nadu until the DA case verdict is pronounced.

On the other hand, senior Congress leader and former union minister P. Chidambaram earlier on Monday said that the Tamil Nadu Governor can use his discretionary powers to decline to swear in Sasikala as the chief minister in the backdrop of cases against her by the ED and pending Supreme Court verdict in the disproportionate assets case.

Sasikala was one of the accused in the DA case. She along with the late Jayalalithaa and two others were convicted by the trial court at Bangalore. The Supreme Court was moved in appeal after the Karnataka High Court had acquitted all four accused in the case.