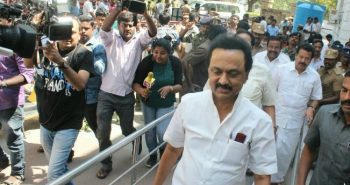 Accompanied by senior leaders including Durai Murugan, Stalin left for Delhi to meet the President this evening.

After landing in Delhi, Stalin hit out at AIADMK chief Sasikala Natarajan. “In Tamil Nadu, benami rule by criminal Sasikala has been established. We have come to meet the President to apprise him of this situation,” he told media persons.

Stalin’s scheduled meeting with the President comes days after he had urged Tamil Nadu Governor Ch Vidyasagar Rao to “nullify” the confidence vote, which was won by Palanisamy after forcible en-masse eviction of DMK legislators from the State Assembly on February 18.

Palanisamy had won the trust vote by a huge margin of 122-11, on Saturday.

To a query by reporters at the airport in Chennai, Stalin claimed that his party’s state-wide hunger strike yesterday was “so successful that the AIADMK is claiming that we are trying to topple their government.”

He also indicated that the ruling party may not fare well in the forthcoming local body elections.