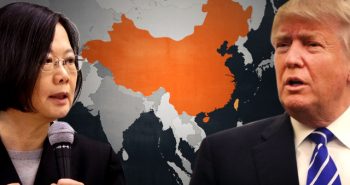 US President-elect Donald Trump spoke Friday with the president of Taiwan, a break with more than 35 years of U.S. policy that is likely to anger China.

A statement from Trump’s transition team said he spoke with Taiwanese President Tsai Ing-wen, who offered her congratulations.

“During the discussion, they noted the close economic, political, and security ties … between Taiwan and the United States. President-elect Trump also congratulated President Tsai on becoming President of Taiwan earlier this year,” the statement said.

Trump tweeted later: “The President of Taiwan CALLED ME today to wish me congratulations on winning the Presidency. Thank you!”

“The (Taiwanese) president is looking forward to strengthening bilateral interactions and contacts as well as setting up closer co-operative relations,” the statement said.

“The president also told U.S. President-elect Trump that she hopes the U.S. will continue to support Taiwan’s efforts in having more opportunities to participate in and contribute to international affairs in the future,” Tsai’s office said.