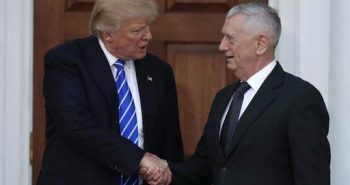 US president-elect Donald Trump has confirmed he will choose retired Marine General James Mattis to be secretary of defence, selecting a former senior military officer who has said that responding to “political Islam” is the major security issue facing the US. Trump made the announcement during a post-election victory rally on Thursday in Cincinnati.

“We are going to appoint ‘Mad Dog’ Mattis as our secretary of defence,” Trump told the crowd, referring by nickname to the tough-talking general.

“He’s our best. They say he’s the closest thing to (World War II-era) general George Patton that we have,” he declared. He said the formal announcement would be made on Monday.

Mattis, 66, is a Marine Corps general who retired in 2013 after serving as the commander of the U.S. Central Command.

He featured in every US-Middle Eastern conflict from the first Iraq War in 1990, and in 2001, led 4,000 Marines in the search for Osama bin Laden.