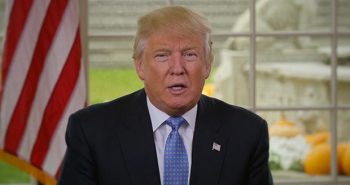 President-elect Trump released a video laying out actions he would take on his first day in office on January 20, including his announcement of a full withdrawal of the United States from the Trans-Pacific Partnership by presidential executive order.

Mr Trump also said he would issue a rule cutting government regulations, direct the Labor Department to investigate abuses of visa programmes, and cancel some restrictions on energy production, including shale oil and gas and coal.

“My agenda will be based on a single core principle — putting America first,” Trump declared in the video.

“I’ve asked my transition team to develop a list of executive actions we can take on day one to restore our laws and bring back our jobs,” the US president-elect said in a video message outlining priorities for his first 100 days.

“I am going to issue a notification of intent to withdraw from the Trans-Pacific Partnership — a potential disaster for our country,” he said.

“Instead, we will negotiate fair, bilateral trade deals that bring jobs and industry back onto American shores.”

The TPP is the largest trade pact in world history, involving 12 countries across the Asia Pacific region.

Australia is one of the key signatories to the TPP and the issue had been discussed at the APEC leaders forum in Peru last weekend.