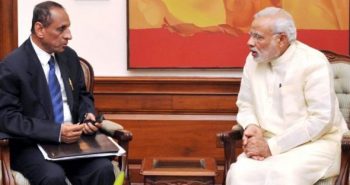 The name of E.S.L. Narasimhan, Governor of the two Telugu states, is doing the rounds in Delhi as a candidate for the position of Vice-President, replacing the present incumbent Hamid Ansari who will complete his second five-year term in August this year.

It is being rumoured that Prime Minister Narendra Modi is interested in elevating Mr Narasimhan who is said to have offered some tips during last year’s “surgical strikes” by India in PoK.

The Prime Minister seems to have been impressed with Mr Narasimhan’s balancing act and initiatives in resolving several outstanding issues between the two Telugu states. According to one Union minister from the Telugu-speaking states, Mr Narasimhan’s elevation is very much on the cards.

The Vice-President is elected by members of both the Houses of Parliament. At present, the NDA enjoys a combined majority in the 245-member Rajya Sabha and 543-member Lok Sabha.