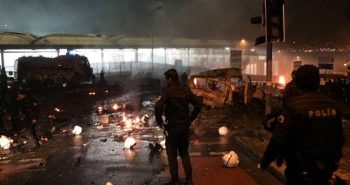 Two bombs exploded less than a minute apart, killing 29 people and wounding 166 outside a soccer stadium in Istanbul on Saturday night, in a co-ordinated attack on police shortly after a match between two of Turkey’s top teams.

Of the 166 injured, six were in intensive care and three of those victims were in critical condition, Turkey’s state-run Anadolu Agency reported.

The bombs targeted police officers, killing 27 of them along with two civilians, Turkey’s Interior Minister Suleyman Soylu told reporters early Sunday. He added that 10 people had been arrested in connection with the “terrorist attack.”

The first bomb went off just outside the facility known popularly as Besiktas Stadium after the local team and neighbourhood. The second blast that came moments later was attributed by authorities to a suicide bomber.

“We have once again witnessed tonight in Istanbul the ugly face of terror which tramples on every value and decency,” Turkish President Recep Tayyip Erdogan said in a statement.

There was no immediate claim of responsibility. This year, Istanbul has witnessed a spate of attacks attributed by authorities to the Islamic State group or claimed by Kurdish militants.