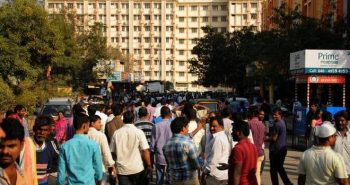 In Hyderabad two women died due to heavy blood loss after a C-Section procedure at Gandhi hospital.  In February beginning in Niloufer Hospital there were circumstances similar to those that had led to five maternal fatalities.  On Saturday two women Ramiza Jabeen (27) and S.Lakshmi (22) underwent C-Section procedure to deliver healthy babies.  Hospital sources said the women suffered bleeding the next day and were administered about 10 units of blood and attempts to halt bleeding went in vain.  Lakshmi expired on Sunday and Jabeen passed away the next day.   “Both women developed bleeding after surgery and all efforts were made to control it.  But co-morbid conditions worsened their condition.   A hysterectomy was also performed on one of them,” a medico in the hospital said while claiming that there was no reason to suspect negligence or inadequacy of post-surgical care.   Jabeen had undergone uterus removal and her uterine bleeding was uncontrollable.  Doctors said it was a complicated case.Lakshmi had delivered eight days ago and had also suffered a head injury which was causing epileptic seizures.  Caesarean said the baby’s position was also abnormal.  Hyderabad District Collector has ordered an enquiry about the death which has left the medical community baffled.