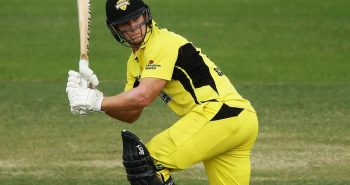 Australia on Wednesday (November 23) named Hilton Cartwright for the first time in a One-Day International squad for the three-match series against New Zealand in December.

Cartwright, the Zimbabwe-born Western Australia allrounder, was the only uncapped member in the 14-man squad for the Chappell-Hadlee Trophy series.

Pat Cummins, who last made his international appearance in September 2015, is also part of the squad while the Australia selectors also included Glenn Maxwell in the 14-man squad for the three One Day Internationals (ODIs) starting on December 4.

Cartwright, 24, belted a century for Australia A against India A in September and started the 2016/17 Sheffield Shield season well, with two half-centuries in the Warriors’ first two games.

Australia face New Zealand at the Sydney Cricket Ground, Canberra’s Manuka Oval and the Melbourne Cricket Ground on December 4, 6 and 9.