Unlike his predecessors, Modi challenging us on Dalai Lama: China 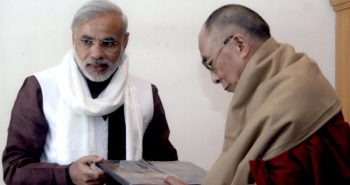 The Chinese reaction to the Dalai Lama’s visit to Tawang in Arunachal Pradesh came in an article in the state-run Global Times, which is part of the ruling Communist Party publications an is known for striking nationalistic postures.

“Unlike his predecessors, India’s Prime Minister Narendra Modi seems to have taken a different stance on the Dalai issue, raising public engagements with the monk and challenging Beijing’s bottom line,” Chinese state media said according to an NDTV report.

“Beijing has voiced concerns over the issue, but New Delhi claimed that China shouldn’t intervene in its ‘internal affairs’,” the article said, referring to Indian Minister of State for Home Affairs Kiren Rijiju’s comments on Tuesday.

“This is absurd,” the article said. Rijiju has said India never interfered in Beijing’s affairs, has respected the “One China” policy, and thus China should not interfere in India’s internal affairs or object to the Dalai Lama’s visit.

“There is no political angle behind his holiness’s visit to Arunachal Pradesh. It is completely religious.” Separately, External Affairs Ministry has said that no “artificial controversy” should be created about the visit.

The Chinese Foreign Ministry is yet to react to Rijiju’s comments or the External Affairs statement yesterday. However, the state media asked India to “overcome its suspicion” of Beijing. “China doesn’t allow India to free ride on its economic growth while jeopardising Beijing’s core interests.”

It warned, “New Delhi may have underestimated Beijing’s determination to safeguard its core interests. Many countries have pledged not to extend invitations to the Dalai Lama.

As the two largest emerging economies, China and India have great potential for cooperation.” Today’s article also accused India of playing the “Tibet card” as it is dissatisfied with Beijing’s stance on India’s bid for Nuclear Suppliers Group membership and its attempts to add Masood Azhar, the chief of Pakistan-backed militant group Jaish-e-Mohammed (JeM), to a UN Security Council blacklist.

“Therefore, Delhi attempts to play the Tibet card against Beijing,” it said, adding that “unlike his predecessors, India’s Prime Minister Narendra Modi seems to have taken a different stance on the Dalai issue, raising public engagements with the monk and challenging Beijing’s bottom line,” it said.

India and China have had discussions on the two issues, yet the matters are far from being resolved, leading to strain in ties. Also, China is sensitive to the visit of the Dalai Lama, who it calls an “anti-China separatist”, to Arunachal’s Tawang region which happens to be the birthplace in 1683 of the sixth Dalai Lama and is at the centre of Tibetan Buddhism.

China has in recent days upped its rhetoric on claims to parts of Arunachal Pradesh, which it calls southern Tibet, and even warned India of “serious damage” to ties if New Delhi allowed Tibet’s exiled spiritual leader’s visit to go ahead.

The article added, “India is also exploring the option of linking the strategic border district of Tawang with a railway network, another provocation against Beijing. India has also invited a ‘parliamentary delegation from Taiwan in February’.”

Citing other instances like the Dalai Lama’s meeting with President Pranab Mukherjee in December, which Beijing sees as a “provocation”, it quoted Rijiju as having said to an international news agency in an interview that “it’s a behavioural change you are seeing. India is more assertive.”

It said that the Dalai Lama is “now openly used by India as a diplomatic tool to win more leverage.” Last night, another piece on the newspaper’s website said India was using the Dalai Lama’s visit to Tawang “to upset” China.

An unnamed Chinese analyst told the newspaper that the 14th Dalai Lama’s visit to Tawang will hurt Sino-Indian ties. “The Dalai’s visit to the controversial area, especially Tawang, which China hopes will be returned, will affect relations between China and India,” the analyst from the Institute of Asia-Pacific Studies of the Chinese Academy of Social Sciences told the paper on the condition of anonymity.

The analyst too pointed out the religious significance of the Tawang to Tibetans, saying it’s the birthplace of the sixth Dalai Lama Tsangyang Gyatso. The analyst said this was not the first time India has used the Dalai Lama to express its displeasure to China, especially when bilateral talks fail to include their demands or to “pander to domestic anti-China issues”.