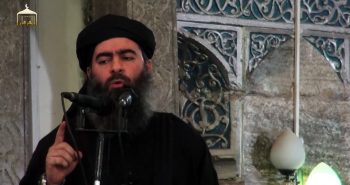 The U.S. State Department’s Rewards for Justice program offered $25 million for information that would help locate Baghdadi, up from $10 million it offered in October 2011, saying the threat Baghdadi poses has increased significantly in recent years. The reward will be paid to anyone who can offer “information leading to the location, arrest or conviction” of the militant.

“Under al-Baghdadi, ISIL has been responsible for the deaths of thousands of civilians in the Middle East, including the brutal murder of numerous civilian hostages from Japan, the United Kingdom, and the United States,” the State Department said, using an acronym for Islamic State.

Baghdadi, an Iraqi whose real name is Ibrahim al-Samarrai, declared himself the caliph of a huge swath of Iraq and Syria two years ago. Followers call him “Caliph Ibrahim.”

His exact location is not clear. Reports have said he may be in Mosul, Iraq, or in IS-held territory to the west of the city near the border with Syria.