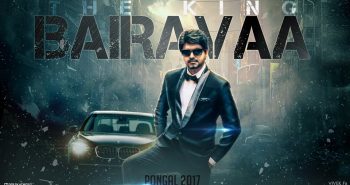 Vijay’s Bairavaa has been sold for a record price in USA.

“We are quite excited about presenting Bairavaa in the USA- the biggest release for Ilayathalapathy Vijay’s 60th movie. We are confident that the film will rake in the moolah at the box office”, said Suresh Venkatachari, Chairman of 8K Miles Media Group in a press statement.

It is said that the film’s US (North America and Canada) rights have been sold to 8K Miles Media, B&B Entertainment and Tentkotta for 500k USD, which is a record for a non- Rajinikanth film. The US is one of the key centres for Tamil movies, being the second biggest overseas market for Kollywood after Malaysia.

The cast and crew of Vijay’s 60th film Bairavaa are currently in Switzerland, shooting a song sequence and the film will hit theatres on the occasion of Pongal festival.