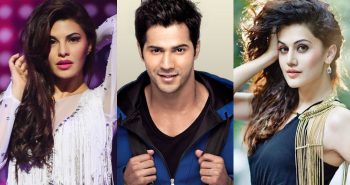 Varun Dhawan is set to get into superstar Salman Khan’s shoes in Judwaa remake and the actor will be seen romancing Jacqueline Fernandez and Taapsee Pannu in the film.

“It’s OFFICIAL.@taapsee and @Asli_Jacqueline with the two of me #Judwaa2,” the 29-year-old actor tweeted.

Fernandez will be playing the role that Karisma Kapoor played in the original 1997’s ‘Judwaa’. On the other hand Rambha’s role will be essayed by ‘Pink’ (2016) actress Pannu.

The film is being produced by Nadiadwala and Grandson and directed to David Dhawan. The masala entertainer is slated to release on September 29, 2017.