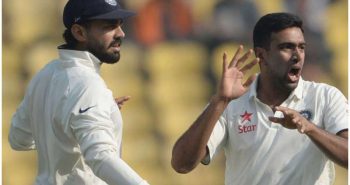 The Tamil Nadu Cricket Association announced the squad on Sunday (December 18) after the third day’s play of the final Test between India and England in Chennai.

Indian Test opener Murali Vijay and offspinner Ravichandran Ashwin were named in Tamil Nadu’s 16-man squad for their Ranji Trophy quarter-final clash against Karnataka, which starts on December 23 in Visakhapatnam. Opener Abhinav Mukund will continue to lead the side.

As far as the knockout schedule goes, Odisha and Gujarat will play in Jaipur while defending champions Mumbai will take on Hyderabad in Raipur. Baroda will host the other quarterfinal between Jharkhand and Haryana.

The two semi-finals were also advanced by two days, starting from January 1 in Rajkot and Nagpur and Indore will host the final from January 10 as against the previously fixed date of January 14.