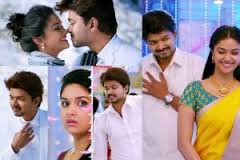 Ilayathalapthy Vijay’s ‘Bairavaa’ trailer has released at 10 pm. The trailer of Vijay’s Bairavaa was released on 31 December to coincide with New Year celebrations, has garnered an overwhelming response from the audience and in less than 48 hours, the clip is set to reach four million hits (40 lakh) on YouTube.

The one minute 48 secs long trailer is dominated by the scintillating presence of Vijay. He utters punch dialogues and engages in a cute romance with Keeerthy Suresh, who gets a longer presence in the trailer than teaser.  Vijay appears in white and black suits in songs and that is going to be a lavish treat for female fans.

The trailer has now created the positive vibes around the movie. Bairavaa will be out on January 12 and the promotions will start soon.