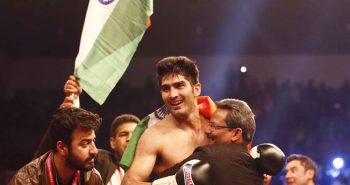 The 31-year-old Bhiwani boxer knocked out former world champion in the third round to successfully defend his Asia Pacific crown, which he had won in July after beating Australia’s Kerry Hope.

Cheka, a veteran of 16 years at the professional level, had won 32 of his 43 bouts before Saturday’s fight and was expected to give a strong challenge to Vijender.

“He (Cheka) wanted to talk more and I wanted to let my punches do the talking. It worked in the end,” Singh said. “I was working hard for this fight with my trainer (Lee Beard) in Manchester. I had put in several hours of training to retain the title. I am happy that my hardwork has paid off,” he added.