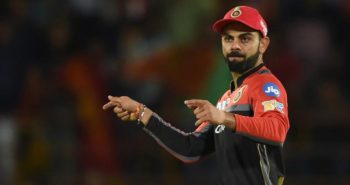 Virat Kohli lashed out at his Royal Challengers Bangalore after the team went down like ninepins to be dismissed for the lowest ever IPL total of 49 against Kolkata Knight Riders here on Sunday.

While RCB bowlers restricted Gautam Gambhir-led side for 131, RCB, which had the likes of AB de Villiers, Chris Gayle and Kohli in their ranks, came crashing down.

Kohli made his displeasure clear during the post-match presentation ceremony, saying: “This is our worst batting performance, if not the worst of all time in IPL. It really hurts. I thought we could capitalise and chase the score down. I can’t really say anything now, because it was that bad. As professional cricketers, we are expected to do much better. Our performance was unacceptable. Disgraceful batting, reckless from us, one of the worst collapses ever.”

Kohli though hoped that his side realises what went wrong. “We need to forget it and move forward. We are a much better team. We got 200 plus in the last game. I’m sure everyone realises what they’ve done wrong. You have to come out, show intent and back yourselves. I’m sure we won’t bat like that again in the tournament,” said Kohli.