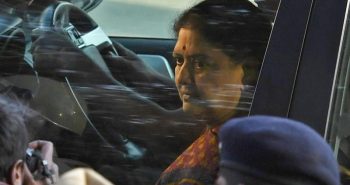 A Right to Information (RTI) query has revealed that 19 people visited AIADMK general secretary Sasikala Natarajan in Bengaluru’s Parappana Agrahara jail since the Supreme Court verdict against her in a Disproportionate Assets (DA) case.

Rules for common convicts say that a prisoner can meet his or her relatives once in 15 days. However, Sasikala seems to have received VVIP treatment, with 19 people meeting her in a month, said an NDTV report quoting an RTI query response.

Moreover, these people stayed beyond the stipulated time for visitors, reports said. While no visitor is allowed after 5 pm, many met Sasikala after 6 pm, the RTI query revealed.

The Supreme Court had in its judgement convicting Sasikala said that the AIADMK chief would be treated as an ordinary inmate while incarcerated, without any special cell or facilities. Subsequently, the AIADMK chief’s requests such as mattresses, a table fan, attached bathroom and special meals were rejected by jail authorities.

But now, the rules seem to have been flouted.

The AIADMK (Amma) faction led by TTV Dinakaran in the absence of Sasikala, is also said to be seeking her transfer to a jail in Tamil Nadu.