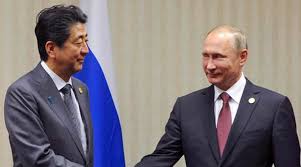 Russian President Vladimir Putin goes to Japan to meet PM Shinzo Abe for talks on the volcanic islands that have stood in the way of a peace deal since World War II.

Russia and Japan kick off a summit Thursday aimed at reaching a deal over a group of small islands that have prevented the countries from formally ending their World War II hostilities.

The two leaders will meet on Thursday at a mountainside inn at the hot spring resort of Nagato in Abe’s home constituency in southwest Japan, and again in Tokyo on Friday.

The four islands are known as the Southern Kurils in Russia and the Northern Territories in Japan, and the dispute has been a thorn in relations for more than seven decades.

“I want to negotiate as the representative of Japan with the keen feelings of the former residents of the islands engraved in my heart,” Abe told reporters before leaving Tokyo.