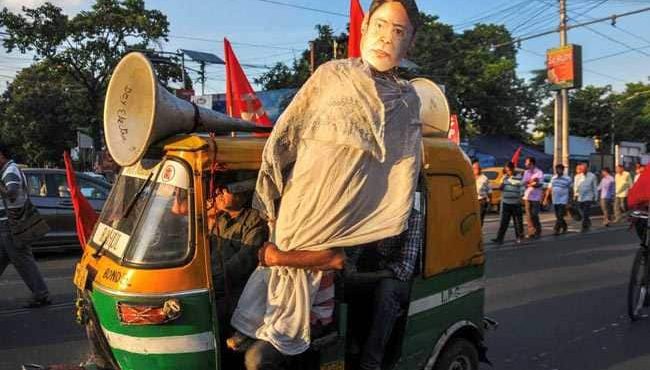 The BJP has called a 12-hour bandh today in West Bengal, protesting the death of two youth at North Dinajpur’s Islampur. Sporadic incidents of violence have been reported across the state. The police are out in full force in capital Kolkata and other sensitive districts.

Protesters have attacked private buses in Howrah’s Tikiapara area and clashes between the Trinamool and BJP supporters have been reported in Barasat. In Cooch Behar and Midnapore, state government buses have been vandalised. Protesters blocked train tracks on the Howrah-Bardhaman main line.

Chief Minister Mamata Banerjee, who is currently on an European tour, has ordered extra police force to be deployed to stop BJP activists from disrupting normal life. “Extra precautionary measures have been taken to counter the bandh. All sanctioned holidays have been cancelled as all senior police officers will be on the city roads,” said a top officer.

Cooch Behar: Drivers of govt buses wear helmets while driving after some of the buses were vandalised by protesters today. BJP has called for a 12-hour bandh in West Bengal today in protest against the death of a student following a clash with police in North Dinajpur's Islampur. pic.twitter.com/Koe7sbcrm0