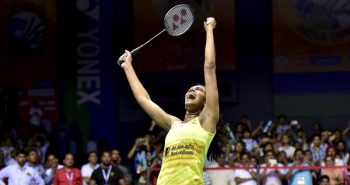 Newly-crowned India Open Super Series champion PV Sindhu feels that winning the hard-fought first game against Carolina Marin proved to be crucial in the final outcome of the match.

“I really played well. The first game was really crucial for me. It was a good match overall. I am really happy with my performance. She also played well. For both of us, the first game was really important. From the start both of us were fighting for every point. There were no easy points, there were long rallies,” Sindhu said after winning the title.

Sindhu rated India Open as one of the most important tournaments in her itinerary.

“After China Open, this is my second title and that too at the start of the year. I would like to thank the spectators, they were really very supportive. It’s been really nice because the whole stadium was cheering for both of us.”

Sindhu said that for any athlete there are no shortcuts to hardwork.

“It’s not about winning or losing, you have to just work hard and give your best. We have played our best matches at the Olympic Games. But I think ups and downs are part of life but you will have to come back and train harder to improve yourself and that’s what is really important.”

Marin on her part admitted that unforced errors cost her dearly on Sunday.

“Today, I couldn’t play my natural game. I committed a few unforced errors and that was the key of the game. The game was good for spectators but not for me because I lost. But I am happy with my overall performance this week,” she said.

Marin too said that she produced her best performance in last year’s Rio Olympics after which injuries affected her performances.

“My best performance was at the Olympics. That was my goal for the year. After that I got some injuries but from January, I am just getting better. But this week gave me some confidence. Now I am motivated to fight hard and keep going in the next tournaments,” the Spaniard said.