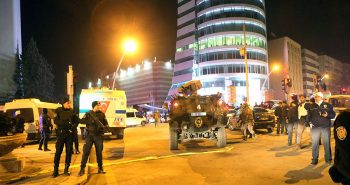 “I condemn the killing of Russia’s amb to Turkey. My condolences to his family & Russian people. No justification for such a heinous act,” NATO Secretary General Jens Stoltenberg tweeted.

“This heinous attack on a member of the diplomatic corps is unacceptable, and we stand united with Russia and Turkey in our determination to confront terrorism in all of its forms,” the White House said in a statement.

“Today we offer our condolences to the family and loved ones of Russian Ambassador to Turkey Andrei Karlov, who was assassinated by a radical Islamic terrorist,” Trump said in a statement yesterday.

Germany’s Ankara Embassy tweeted: “We strongly condemn the assassination of Russia’s Ambassador to Turkey in Ankara. Our thoughts are with his family+friends.”

“We believe the terror attack perpetrated against Karlov would more strengthen Russia’s and Turkey’s determination on counter-terrorism, cooperation and partnership efforts,” it added.

“This terror act directed against a representative of a sovereign country was designed to disrupt and frighten the bilateral relations between Turkey and Russia,” it said.

“The Embassy of Israel in Turkey is shocked and saddened by the horrible assassination of a colleague, ambassador Andrey Karlov,” Israel’s embassy in Ankara said as it conveyed its condolences to Karlov’s family and the Russian people.