Yogi Adityanath as UP CM is shocking rebuke to minorities: US daily 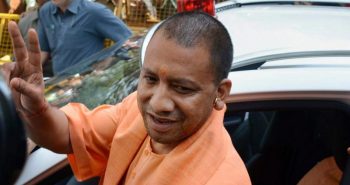 The move by Prime Minister Narendra Modi’s party to name “firebrand Hindu cleric” Aditya Nath Yogi as Uttar Pradesh’s Chief Minister is a “shocking rebuke” to religious minorities, a leading US daily said on Friday in its editorial.

The New York Times in the highly critical editorial titled ‘Modi’s Perilous Embrace of Hindu Extremists’ said since he was elected in 2014, Modi has played a “cagey game, appeasing his party’s hard-line Hindu base while promoting
secular goals of development and economic growth”.

There was no immediate comments on the editorial from the Prime Minister’s office in New Delhi. While there were “worrying signs” that he was willing to
humour Hindu extremists, the editorial said Modi refrained from overtly approving violence against the nation’s Muslim minority.

However, Modi “revealed his hand” when emboldened by a landslide victory in recent elections in India?s largest state of Uttar Pradesh, his party named a “firebrand Hindu cleric, Yogi Adityanath, as the state’s leader”, it said.

“The move is a shocking rebuke to religious minorities, and a sign that cold political calculations ahead of national elections in 2019 have led Modi’s Bharatiya Janata Party to believe that nothing stands in the way of realising its
long-held dream of transforming a secular republic into a Hindu state,” the editorial said.

It noted that Aditya Nath has made a political career of demonising Muslims. The editorial said Uttar Pradesh badly needs development and not ideological showmanship.

It said Aditya Nath has sounded the right notes by saying that his government will be for everyone and not specifically for any caste or community.

“But the appointment shows that Modi sees nocontradiction between economic development and a muscular Hindu nationalism that feeds on stoking anti-Muslim passions,” the editorial added.

In a criticism, it said Modi’s economic policies have delivered growth, but not jobs at a time when India needs to mgenerate a million new jobs every month to meet employment demand.

“Should Adityanath fail to deliver, there is every fear that he and Modi’s party will resort to deadly Muslim-baiting to stay in power, turning Modi’s dreamland into
a nightmare for India?s minorities, and threatening the progress that Modi has promised to all of its citizens,” it said.