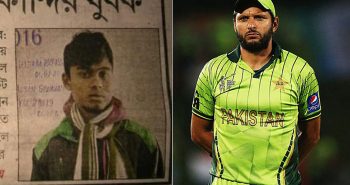 As per a report by the Assam News, a die-hard fan of Shahid Afridi has been arrested on December 18 by local police on charges of wearing a Pakistani jersey during a cricket match in Hailakandi in Assam.

According to reports, the youth, Ripon Chowdhury was apprehended by local police following a complaint filed by the youth wing of the ruling Bhartiya Janata Party (BJP).

Reports claimed that a FIR was also filed against him under section 120 (B), 294 of the Indian Penal Code.

Following this, the local Bharatiya Janata Yuva Morcha committee lodged an FIR against him demming him as being anti-national.

Investigation is underway and further details on this is awaited.