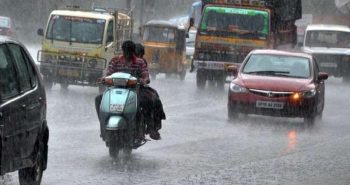 Cyclone Gaja’s movement  has brought rain to Coimbatore and it will continue for the next two days . In the weekend the district would continue to witness 30-40 mm rainfall as per the weather watchers at the Agro Climate Research Centre at the Tamil Nadu Agricultural University. There would be 50-60 mm rainfall in Annamalai,Valparai and Pollachi on each of the next two days. It would be around 19 degree celsius of  night temperature and wind speed would continue to be over 10 kmph. For the 17 days of November after the start of  the North East monsoon district had recorded 27mm rainfall. The long term average for the month for the district was 113 mm, the Centre said, and added that as more depressions were being formed in Bay of Bengal, the district could witness more rains in the next couple of weeks. The district administration had declared a holiday for schools. Heavy rain had disrupted traffic movement in Coimbatore.