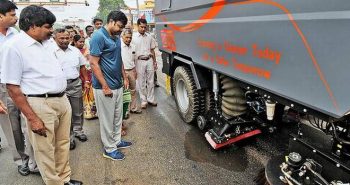 To clean the Coimbatore streets a road sweeping  machine has been  flagged off by corporation Commissioner K.Vijayakarthikeyan.  The machine is sponsored by Roots Industries under the corporate Social Responsibility project.  The machine is mounted on a truck. It would go around the streets cleaning  mud,accumulated on roadsides  which includes waste too.  Long distances will be covered in a short time.  Roots Industries would operate thermachine for three years at its expense.  Instructions and police permission would be taken from the corporation on where to use before starting cleaning.  In 2015 the civic body tried to buy the mechanized cleaning from the industry but this move  did not fructify .  In2010 three vehicle mounted cleaning machines were used but citing high cost it was stopped.  These vehicles consumed much fuel and they engaged a driver as it is not a regular lorry driving.  These vehicles which have been idle now are being used under the Swacch Bharat Scheme.