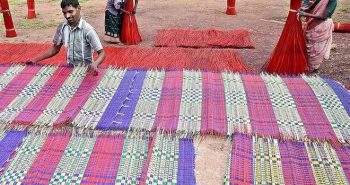 In Salem district ,the Korai mat industry has been badly hit because of the poor flow in River Cauvery leading to severe shortage of Kodai grass.  In Kanjanayakkanpatti,Sikkanapatti,Tarapuram and Semmanadapatti ,there are about 1000 Korai mat production centres with more than 15,000 employees.  The mats were hand woven  a few decades ago and as a result only few mats were produced in a day.  Later power loom units have been introduced and as a result around 300 mats can be produced everyday.  In West Bengal ,Maharashtra and Karnataka ,there is a good demand  for these Korai mats.   Korai grass is raised in abundance in the villages situated on the banks of River Cauvery in Tiruchi, Karur and Namakkal districts.  At present the Korai grass cultivation in Tiruchi,Musiri and Kulithalai has been affected  because of the failure of monsoon resulting in poor flow of water in River Cauvery.  As per the production mat units in Omalur the arrival of Korai grass stock has dwindled in the last couple of months.  The bundle of Korai grass now cost Rs.1300 which cost Rs.800 a couple of months ago.  If the water situation is the same with the delay in North east monsoon,then this industry would be a disaster.  The standing Korai grass will last only for the next two months.  It is a private sector and mats price cannot be increased  owing to this issue as they fear losing patronage.

Temperature increased in 13 districts of TN