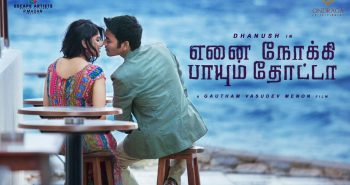 Dhanush shared the posters on his social media account.

The first look has impressed audience, who are sharing good words about it on Twitter using hashtag – #ENPT.

Tweets posted by celebrities on the first look:

Radikaa Sarathkumar: @dhanushkraja @menongautham Now this is what I would call a bullet proof first look.

Gautham Menon had previously said that Enai Nokki Paayum Thotta could be divided into two parts in terms of its storyline. The first is more romantic and fun, while the second is heavy action sequence. The posters too indicate these two very divergent aspects of the film.

The teaser for Thotta is now expected to be unveiled on 6 December, along with the film’s music, at a “grand event”.

The film features Dhanush and Megha Akash in the lead roles. The film is produced by Ondraga Entertainment, and also features Rana Daggubati.