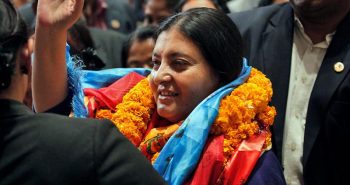 Nepal President Bidya Devi Bhandari left for India on Monday on her first foreign visit, during which she will hold talks with the top Indian leadership to strengthen bilateral ties.

She left for New Delhi in a special Nepal Airlines flight from the Tribhuvan International Airport in Kathmandu. The TIA had on Sunday announced a 35-minute flight restriction from 10:30 am to 11:05 am local time for security reasons.

Nepal government has announced a public holiday today to mark her visit. As per custom, public holidays are announced in Nepal whenever the head of the state embarks on an official foreign visit.

April 22, when she returns home, will also be a public holiday in Nepal. She is visiting India at the invitation of President Pranab Mukherjee and will stay at the Rashtrapati Bhawan.

It will be Bhandari’s first official visit abroad after assuming the office in October 2015. A high-level delegation comprising several ministers and MPs is accompanying her.

In the past six months, there have been several high-level visits between Nepal and India. Nepal Prime Minister ‘Prachanda’ visited India twice – in September and October – and President Mukherjee visited Kathmandu in November.

Bhandari, 55, was scheduled to visit India in May last year, but the trip was cancelled after the then Cabinet did not endorse her visit programme, citing lack of preparations on the part of the government.

In India, she will hold talks with President Mukherjee and Prime Minister Narendra Modi on Tuesday, exploring ways to expand cooperation between the two neighbours whose ties were strained over the agitation by the Madhesi community last year.

The bilateral ties between the two countries faced turbulence last year due to the Madhesi agitation and the subsequent blockade of border trading points which halted the supply of essential goods to landlocked Nepal from India.

Madhesis, mostly of Indian-origin, had been demanding that the new Constitution be amended to include their concerns about adequate political representation and redrawing of federal boundaries.

Tomorrow, she will attend a business event organised by industry chambers CII, FICCI and ASSOCHAM. She is also scheduled to visit Gujarat and Odisha and pay obeisance at temples of Dwarka, Somnath and Puri.