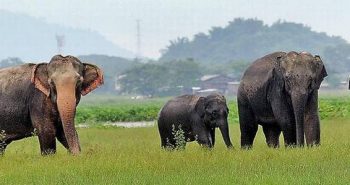 An  elephant census  is about  to be conducted between May 9 and 12 in the States of Odisha,West Bengal ,Chhattisgarh and Jharkhand.  This is the first such attempt.  On Friday during a regional workshop a  decision to this effect was taken by senior Forest Department Officials of the four states.  The census  will be based on an identical set of rules.  The States will conduct this census using the direct and indirect counting  methods.  On May 10th night –a full moon night the elephants can be sighted easily so the dates have been chosen specifically.  Making a count based on the night of elephants is direct method.  The ‘dung  decay’ formula is used in the indirect method in which  the analysis of elephant dung is used to estimate the population.  Karnataka and Tamil Nadu used the second method. As per the 2015 census, Odisha has 1,954 elephants while Jharkhand, Chhattisgarh and West Bengal had approximately 700, 275 and 130 elephants, respectively.  “Earlier, field officials were deputed inside a forest area for direct counting.   It was expected that the entire area would be covered. But, that is not possible because of many reasons.   As a result, the population was underestimated in some places while duplication was reported elsewhere,” said S. Srivastava, Principal Chief Conservator of Forests of Odisha.  A simultaneous census will eliminate these factors.