OPS camp may pitch his name for TN CM after AIADMK merger: report 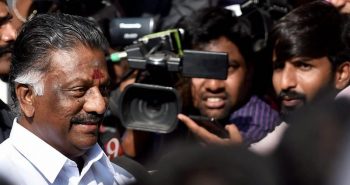 “It was just a courtesy visit, no politics was discussed,” he was quoted as saying after the meeting.

Meanwhile, the AIADMK faction led by former Tamil Nadu Chief Minister O Panneerselvam was slated hold a meeting on Thursday, to chalk out a strategy for talks with the other group led by Chief Minister Edappadi K Palanisamy.

There is disagreement between the Panneerselvam and Palanisamy camps over the allocation of portfolios in case of a merger. According to reports, both camps want their respective leaders to be Chief Minister of Tamil Nadu. The Palanisamy camp argues that it would not be prudent for the state to have its 4th CM in 6 months, and hence Palanisamy should stay.

“He won a trust vote with 122 MLAs endorsing his leadership. Thus he will continue and there is no change in that stand. We will hold talks (for merger) and iron out issues,” Thambidurai was quoted as saying on the issue.

Panneerselvam however, has been thrice Chief Minister, twice on late AIADMK chief Jayalalithaa’s order, and his faction is using this as its argument to bolster his case for the top post.

M Thambidurai had on Monday said the Dhinakaran faction was ready to hold talks with the Panneerselvam camp so as to work for the merger of the two factions.

“Those who left due to differences… let them come, we are ready to talk,” he told reporters in Chennai.

Dhinakaran has since been forced to step aside, but said on Wednesday that he would not resign as AIADMK deputy general secretary until he gets the green signal from party chief Sasikala Natarajan, who is lodged in a Bengaluru jail.