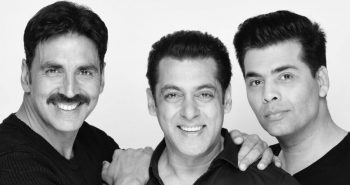 The three powerhouses of Bollywood: Salman Khan, Karan Johar and Akshay Kumar have joined hands to give us a BLOCKBUSTER this year!

Late last evening, Karan Johar took social media by storm when he tweeted this and wrote, “Supremely excited to co-produce with @BeingSalmanKhan #SKF on a film starring @akshaykumar directed by Anurag Singh. The film releases in 2018!”

“Truly a fraternity feeling when friends come together to make a special film,” Karan wrote in a separate tweet after making the announcement.

Salman says, “This is the perfect announcement to make in the New Year. I’m happy to collaborate with my friend Akshay, who has grown immensely as an actor. It will also be our first co-production with Karan. I am truly excited about the three of us coming together.” Akshay adds, “I couldn’t have asked for a better beginning to 2017, with two industry heavyweights coming together for a project starring me. Such things don’t happen often. The film has an interesting subject and I am sure people will be excited to watch it. I, for one, can’t wait.”

All three tweeted the same photo of them, revealing that their venture will hit screens in 2018.